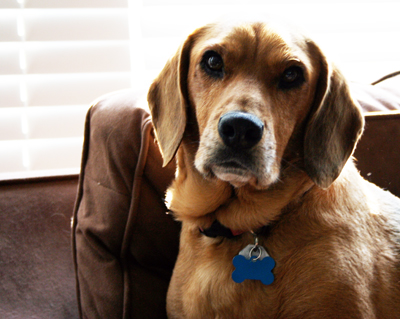 We’re not sure about Bixby’s age but when Laura adopted him the vet estimated he was a couple of years old so as of 2009 we guess he was about 9 in human years. 1xbet شرح

Laura saw this Beagle one day on Channel 5 (KSDK-TV/St. Louis) as a “Pet of the Week” and decided she had to have him.  He was in at least 4 previous homes before he came home with Laura but Bixby became very attached to her.  When I showed up, Bixby would not even let me sit next to Laura without wedging himself between us.

Since we met Bixby (a.k.a. “Velvet Ears”) he has lived through getting run over by a van when he broke free from his collar and ran into the street.  He accepted a new puppy into his life…a puppy who now weighs almost 80 lbs and routinely kicked his butt in wrestling matches.

He survived two episodes of moving better than I did.  Bixby welcomed two kids into his world who took away a lot of mommy’s time.  He drove to Saugatuck, MI straddling the backseat and the console of the Expedition the entire 8 hour drive the year we got married just to hang at the beach.

Bixby was also responsible for yanking me off-balance on an icy sidewalk one cold, dark night.  I went down flat on my back, hit my head, and spent a little time in the E.R. the next morning.

One of the best was the night Bixby was my accomplice when I proposed to Laura.

On Sunday afternoon (4/5/09), Bixby’s front left paw began to “knuckle” which simply means it would curl under and he was unable to consistently place his paw on the ground and he was “walking drunk.”

A trip to the E.R. indicated that he most likely had messed up a disc in his neck.  Over the course of a couple of days, Bixby no longer had the ability to stand, let alone walk.  He wasn’t going on his outside breaks either so his bladder was so full he was bloating. العب الأن  He was however very alert and when he would hear the rustling of food action in the kitchen he would perk up.  Mmmmm…peanut butter crackers.

Even his insatiable love of food wasn’t enough.  We tried to help him fight but it was clear that Bixby was tired of trying and that he just wanted to rest without being uncomfortable.  Now, he is resting.

I have had to put down a dog only one other time in my life – Xavier was a Sheltie – and I still consider it the hardest thing I’ve ever had to do in my life. This time wasn’t any easier.  This time it wasn’t just me and my buddy. لعبة الروليت اون لاين مجانا  This was the dog that my wife chose – not me – which means even though I loved him, she had the deep connection. We have another dog who tonight is searching the house for his friend.  We have two kids and they needed to understand as much as a 2 year-old and 4 year-old are able to grasp about death.

But the most profound difference is that I knew what to expect because I had been in the same place before and the best thing about making this tough decision is knowing the pure relief – his and ours – that is just on the other side.

We are sad because we won’t get anymore licks.  We won’t get a nuzzle from him while we’re sitting on the floor.  No more scratching on my studio door at 2am when he realizes I’m still up.  We won’t get his crying in the middle of the night when he can’t jump up on the bed because he just wants to lay next to us.

We are joyful because we’re full of the memories he gave us. We’re relieved that he isn’t uncomfortable anymore. And we’re grateful that through the sadness, Bixby gave us a chance to teach our kids about death – something that is a part of life for everyone.  This – in my opinion – is one of the blessings that God has for those of us who have pets to experience. There is no specific Biblical proof that dogs will be in Heaven, but there is evidence that other animals will be there so, why not dogs?

Knowing the seriousness of his condition, we began to prepare our 4 year old son Matthew for the possibility that Bixby might go to live with Jesus.  We talked about it in very simple terms as we have talked about death before but he has never experienced it personally in his life.  Kate is a little young, but I actually think she’s tracking with what we were telling her.

Matthew and Kate laid on the floor with Laura and me and we surrounded Bixby.  We all gave him hugs and kisses and we told him we loved him very much.  Then we prayed and thanked God for giving us our friend and that we were ready to let him come home to Him.

We did it as a family and it was good.

Right after this picture was taken, we took Bix to our vet.  Laura and I had our final moments with him.