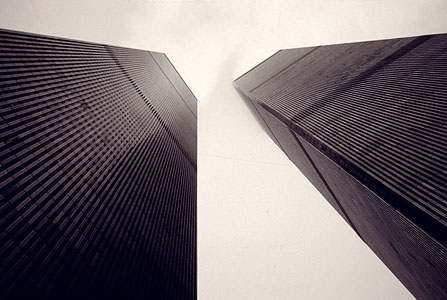 Not Just Any Other Day

I was reading news on my phone while I walked my dog.

That’s what I did every day.

The story I read said a small plane had collided with the World Trade Center.  I still remember gasping when I read that.  I’m not a pilot but I love to fly whenever I get the chance – commercial jets, single engine props, helicopters – and I remember how the pit of my stomach got tense just thinking about how – maybe in the fog or heavy cloud cover – a pilot made a mistake and a terrible accident occurred.

I took the dog back inside and that’s when I saw the pictures.  I knew the right away the original story I read was wrong.  Like everyone else I couldn’t stop watching. And then I saw the second plane hit.  Oh my God.

Driving to work, I punched around every local radio station trying to hear new information but all the stations had the same information as they were repeating news from TV and commenting on the video.

The next time I saw pictures was when I arrived at the station and while I was in a production studio with a co-worker I remember making a comment about how “that tower looks bent at the top” and wondering how in the world can they “fix” that?

The first tower fell about 15 minutes later.  As bad as the day had been, I think that’s when we really got it.  That this was bigger than any event so many people had ever seen at the same time.  This day was different.

How totally unthinkable.  Even New Yorkers were caught so off-guard that when Firefighters entered a Starbucks to take all of the available bottled water, the baristas made them pay for the water.

The radio station I worked for at the time had a consultant who needed to fly home and since we figured that wasn’t going to happen we tried to get him a rental car.  Work stopped.  We all just watched.  Like everyone else.  We weren’t in NYC.  We weren’t in Shanksville.  We weren’t at the Pentagon.  We didn’t have to be.  It still happened to all of us. بطولات الليفر

As a creative radio guy, I felt a need to respond and that meant creating something.  I did it for selfish reasons at the time and I think that is really when you can create your best work. افلام للعبة افلام   Create to please yourself and if others like it then that’s great.

Do you remember the Stars and Stripes flown everywhere? Everyone was a patriot. We thanked God for our lives and our great fortune to live in a country where we enjoy real freedom and we had faith that those responsible for this act would be met with great force and crushed. Congress sang God Bless America on the steps of the Capitol.

God’s name – NOT in vain – in Washington, DC.  Imagine that.

9/11 changed everything and by 9/12 everyone was different.

Listen.  Remember how it felt.